Australian Intercultural Society (AIS), in partnership with the Australian Catholic University (ACU) celebrated the appointment of Associate Professor Salih Yucel to the Fethullah Gülen Chair in the study of Islam and Muslim – Catholic Relations on Monday, 31 July, 2017.

The Fethullah Gülen Chair, which focusses on providing academic leadership in learning, teaching, research and scholarship, aims to promote the critical examination of current trends in the study of Islam and Muslim-Catholic relations as an essential part of interfaith co-operation, understanding, exploration and dialogue. The Chair was originally launched in 2007 seeking to build on AIS’ dialogue initiatives and imbue a sense of rapprochement between cultures and civilisations underpinned by the fundamental principles of respect and seeking understanding.

The event was MC’ed by Professor Dermot Nestor, Dean of the Faculty of Theology and Philosophy which is home to the Chair.

In his welcoming address, Professor Greg Craven, Vice Chancellor of ACU said “In partnership with the Australian Intercultural Society, we are pleased to reaffirm our joint commitment to the Fethullah Gülen Chair in the Study of Islam and Muslim-Catholic relations and appoint Associate Professor Salih Yucel to the position”. He added “The Chair plays a critical role in conducting research that is leading edge, here in Australia and worldwide. Beyond developing important new programs in interreligious dialogue, the Chair contributes to a greater vision – that of promoting mutual respect, understanding, and good relations between Muslims and Catholics everywhere”.

The Executive Director of the AIS, Mr Ahmet Keskin stated in his welcoming remarks “The AIS values its partnership with ACU and has jointly hosted lectures, panels, conferences and iftar dinners to name just a few initiatives. The AIS is pleased to reinvigorate the Chair especially in this era where there’s so much tension and misunderstanding, and that it’s vitally important to continually strive to build bridges and provide access points for information exchange”. Mr Keskin thanked ACU for their ongoing support and added the AIS board and their partners are pleased to continue this relationship.

Associate Professor Scott Alexander from the Catholic Theology Union (Chicago, USA) delivered the main address in which he characterized the Hizmet movement inspired by Mr. Gülen as being  “at the centre of a critical chapter in the rich history of Islamic civilization, offering a paradigm for spiritual renewal and social reform rooted in education, dialogue, charity and social justice activism.” He went on to underscore key synergies between Gülen’s teachings as a mujtahid (authoritative interpreter of Islamic norms) and mujaddid (a revitalizer of the faith for millions of Muslims) and the teachings of Pope Francis, “especially with respect to the preferential option for the poor and an emphasis on a spirituality of inclusivity.”

Professor Salih Yucel, the holder of the Chair pointed out that whereas many conventional Islamic renewal movements “focus on opening mosques, and sponsoring curricula in the traditional religious sciences, Hocaefendi (Fethullah Gulen) has encouraged people to open dormitories, schools, universities, hospitals, humanitarian aid organisations,” thus expanding the notion of what constitutes truly Islamic institutions in the service of the human family.

The event was well attended with members from the ACU leadership team, interfaith and community leaders who have supported the AIS through their journey.

The AIS wishes the best for the Chair in its endeavour to provide quality research and sincerely thanks the Australian Catholic University for their ongoing cooperation. 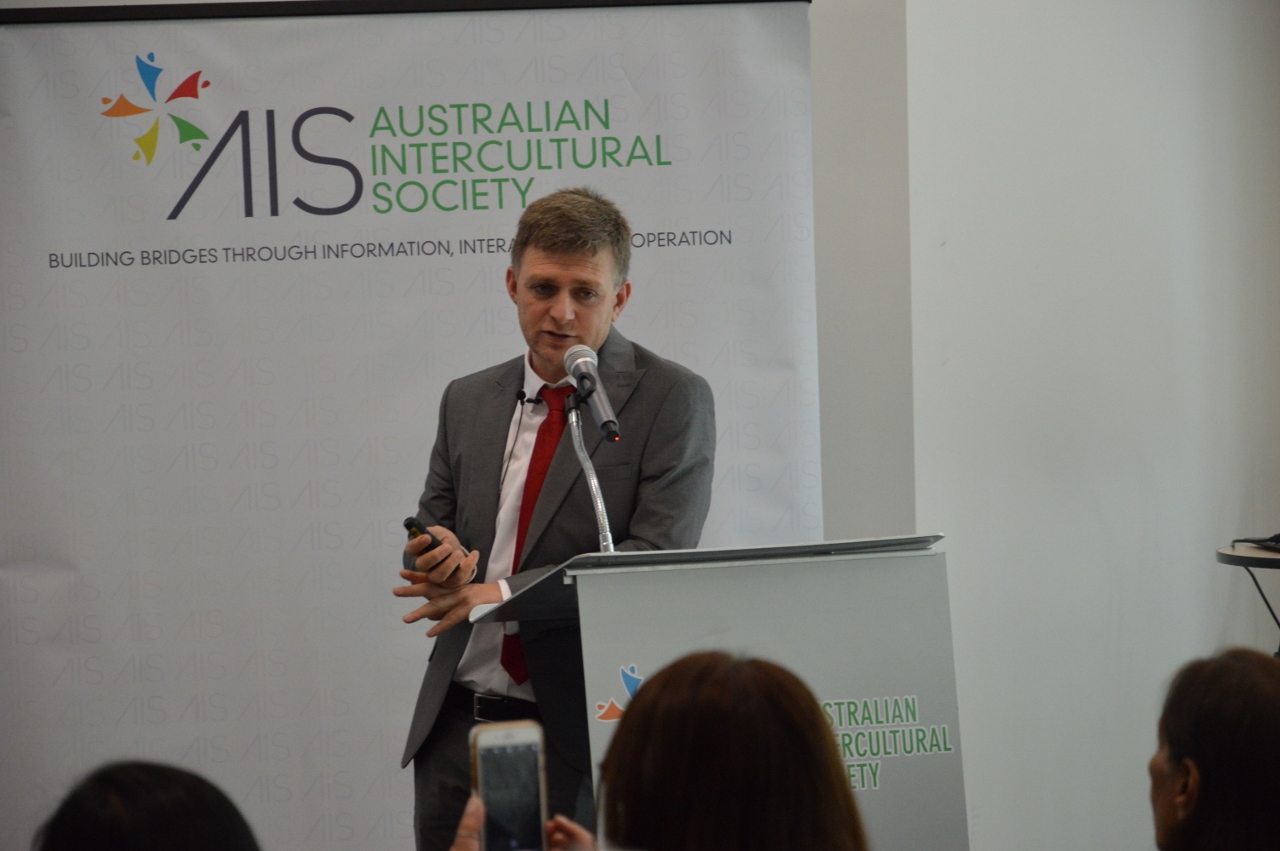 On the 26th of November, the Australian Intercultural Society hosted Mohib Iqbal and Charlie Allen from the Institute for Economics and Peace to launc
Menu