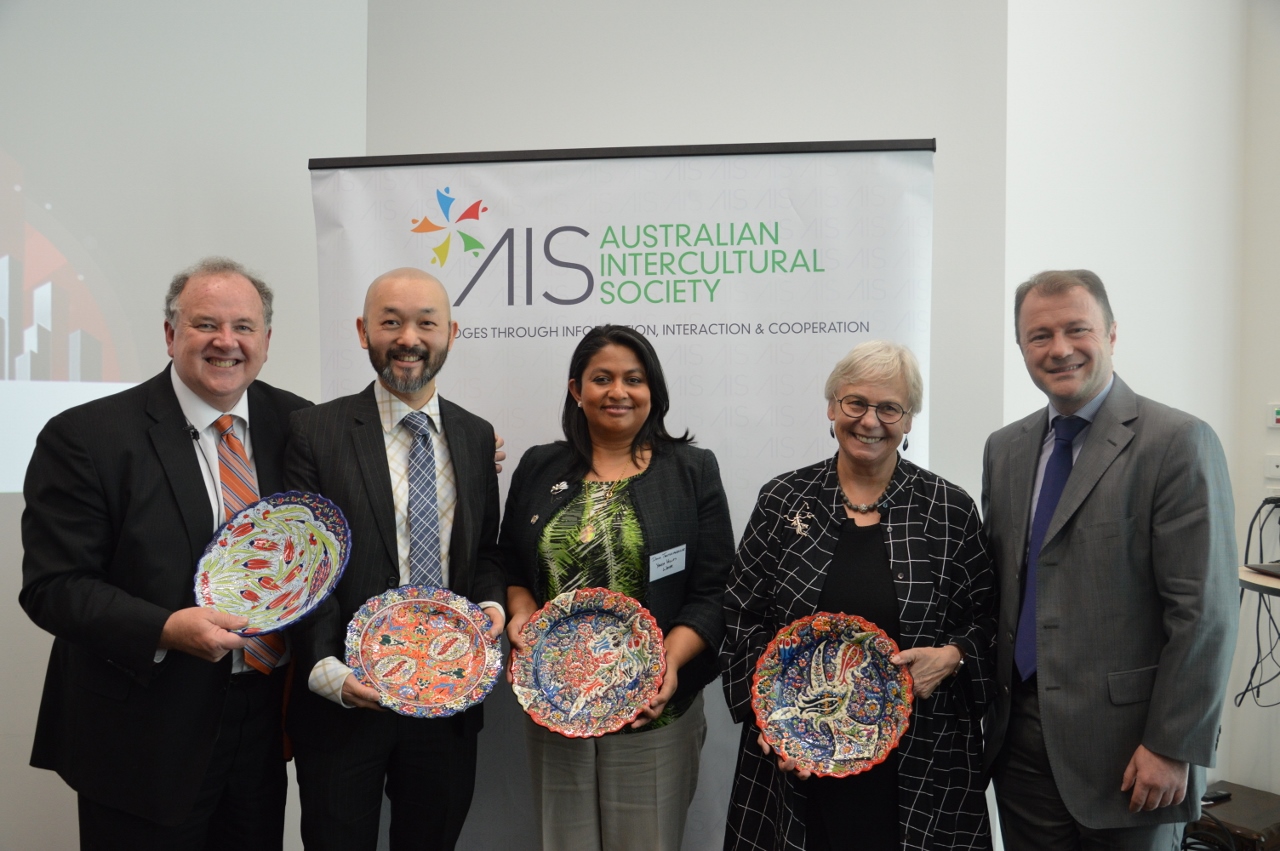 “What makes you optimistic?”

That was the main question being asked on November 19, 2019 when the Australian Intercultural Society hosted the “Curious Case for Optimism” panel in order to discuss the role of optimism in our current society. The panel consisted of Cheryl Batagol, Environment Protection Authority (Victoria) Chair, and Cooperative Research Centre for Water Sensitive Cities, Dona Tantirimudalige the President of The Institute of Water Administration General Manager Distribution Services at Yarra Valley Water, and Professor Erwin Loh the Group Chief Medical Officer at St Vincent’s Health Australia and a Clinical Professor at Monash University. The discussion was moderated by Victor Perton the Chief Optimism Officer at The Centre for Optimism and author of “Optimism: The How and Why” and “The Case for Optimism: The Optimists’ Voices”.

The discussion began with each of the panelists stating what makes them optimistic. Cheryl Batagol, PSM works with bringing clean water to slum settlements in Indonesia and Fiji and trying to clean the environment in slums since children in these slums have constant diarrhea and are generally shorter than their peers. She is putting a walkthrough in these slums that is providing the people who live in these slums a way to get through the feces infested water. She states that it’s hard not to be optimistic after seeing people in this position. Dona Tantirimudalige stated that the ozone layer is repairing itself after years of it being a huge crisis, “There are solutions out there to help fix climate change but we have to believe that success is a possibility, we have to be able to envision that success look at where we are right now, and put actions into place to get there.” Following up this statement Victor asked “How is there a change in narrative from pessimism to optimism?” to which Dona replied, “We need to start bringing people to the table who don’t just talk about the challenge, but come up with solutions to the challenges. These ideas energize people and makes everyone more optimistic.” Professor Erwin Loh then stated that one must “be an optimist and be relentless in pursuing the beacon of hope so that you are always moving towards that light that will guide you shine on you and keep the shadows of darkness and despair behind you. Optimism isn’t just being a wishy-washy feeling of happiness and blind space and things are just gonna be okay, but looking at the downside and making a conscious decision to have hope. Some people are born glass half full rather than glass half empty. The research shows that optimism has positive outcomes for mental health… and for physical health. In one study conducted over 30 years, Harvard and Boston University found that optimistic people had a longer life span and lower mortality by over 11%.” In another meta-analysis, they discovered that optimistic people had a lower risk of cardiovascular disease and a lower mortality risk by 35%. Optimism doesn’t just affect one’s mind, but also their physical health”.

Victor Perton then ended the discussion part by stating that “Optimism is 25% genetics and 75% the decisions we make”. In the Question and Answer part of the event, one question that really interested the panelist was “How can we and the future generation be more optimistic to use social media to deal with the tall poppy syndrome and how social media affects us [since] it seems the controversial post get the most attention, how do we deal with that?”. Dona believes that one must “use mindfulness to actively avoid articles and clickbait that are only there to bring you down. The simple act of not engaging can be really powerful”. Erwin then stated that “this isn’t a new problem, but now since we’re so attached to our phones it’s being studied. The likes are made to cause a dopamine rush. Social media has more users than the populations of some countries. But it’s like smoking and drinking, it’s an addiction and we need to learn moderation when dealing with social media. There’s also a good thing that comes with social media like climate change protest and Hong Kong fighting for democracy and these are the positive sides of social media. We need to use social media for more positive things”.