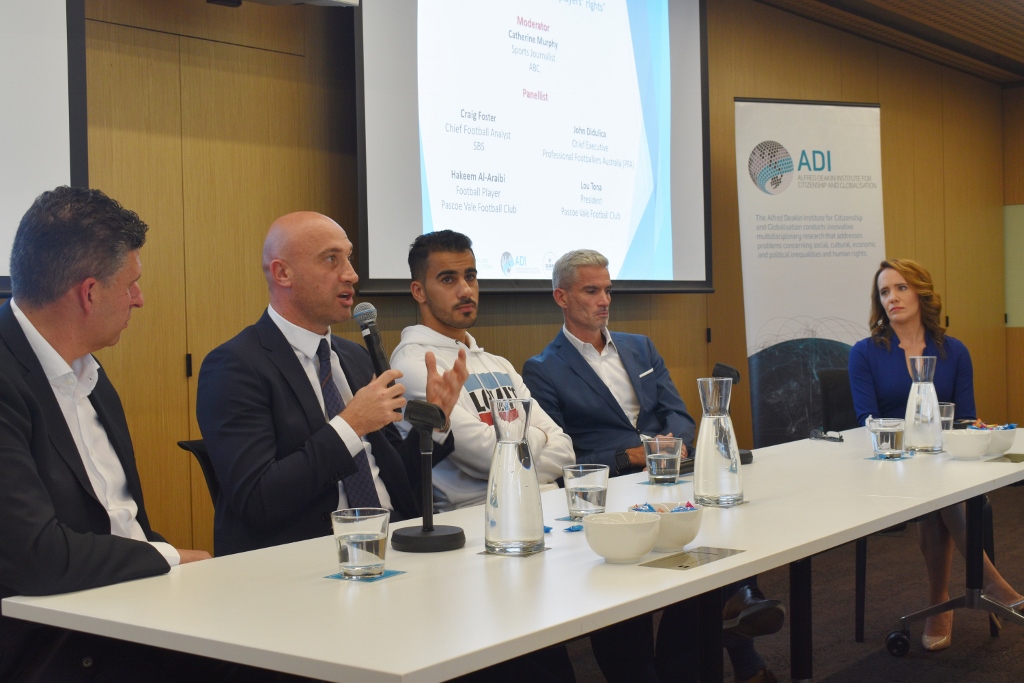 On Tuesday 2nd of April 2019, The Australian Intercultural Society partnered with Deakin University and Football Victoria to host a panel discussion on “Football and Human Rights: The world game sticking up for players’ rights”.

The panel began head first discussing Hakeem’s imprisonment in Thailand after being detained during his honeymoon in Bangkok. Hakeem discussed his time in prison, as well as the overwhelming support he received from the citizens of Australia as a whole. When he returned, he returned to an abundance of supportive fans and says that even today when he walks down the street with his wife, he has passerby’s say “Hakeem! Welcome Home!”.

His club Pascoe Vale Football Club was the starting point of the campaign to bring him home. Club President Lou Tona, discussed his initial efforts to help Hakeem. “This was mammoth..” says Lou. He remembers hearing that Hakeem’s wife was sent home and he was moved to another prison and said “from that point on it was ‘we have to support one of our own’”. The campaign to bring Hakeem home became a national outcry for equality and support of our fellow human beings. He talked about the team’s trip to Tasmania while Hakeem was still in Thailand and reminisced on all those in the airport who held “Save Hakeem” signs, asked about his return, and chanted “Save Hakeem” in the streets following an entire event held by the Tasmanian Government in honor of the cause.

The panel discussed the progress of the campaign and how other organisations took their cause and ran with it. Namely Professional Football Australia (PFA). The PFA President, John Didulica, discussed their efforts to raise awareness for the cause, but claimed “awareness wasn’t enough… that awareness needed to shift to activism. That final surge was when the shackles appeared on the news, and when people saw that image, it shifted from me having to call people up and ask for help to people calling me saying ‘what can I do?’”. The issue boomed from a “local sporting issue to a national issue” according to Didulica. People spoke on who Hakeem was as a human being, which gave the campaign the extra force it needed. “He was a humble guy who is one of us.. And that really resonated with people” Didulica  stated.

“In fighting for hakeem we were fighting for things that are part of our DNA, and I think that’s how we convinced the country and most of the sporting world… “ stated Craig Foster. “We believed in the multicultural nature of our game”. As a former football player, Foster felt an immediate kinship to Hakeem and knew he had to do everything he could to help him following an “if not me, who?” mindset. He worked the political face of Football, acknowledging that “football is as political as any other field of life. Everyone is trying to trade something”. He discussed his difficulty in getting organisations, specifically FIFA, to give public support of the issue, claiming that most big name organisations like that are in it for trade or benefit, and when they realised the campaign had nothing tangible to offer them, it was nearly impossible to convince them to offer support.

The night continued on with questions on the situation, both from Catherine Murphy and the eager crowd. Craig Foster made a comment that truly sums up both the fight to bring Hakeem home as well as the everyday goals of organizations such as AIS. He stated that “In football we fight for everyone, because we’re all the same”. This message holds true for Football, Australia, and the world. No matter what ethnic background you come from or religion you practice. We fight for everyone, because we are all, every human being on this planet, the same.