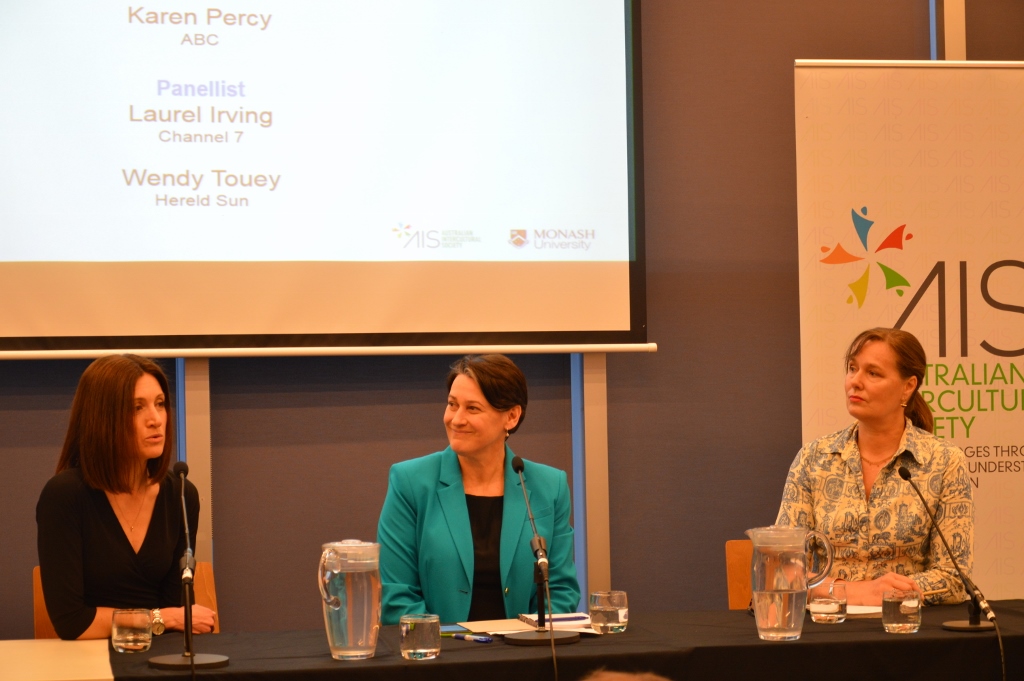 The AIS in partnership with Monash University co-hosted a panel that addressed challenging issues that still confront women across different professional environments. The star stellar line-up panel included Karen Percy (ABC), Laurel Irving (Seven Network) and Wendy Tuohy (Herald Sun) who shared their views on “From Mansplaining to Manterruption: How to rise up and be heard”.  The program was opened by Associate Professor Mia Lindgren, Head of Monash University’s School of Media, Film and Journalism, who mentioned how she’s seen many women enrol in the school with a view of carving out a long term career despite the challenges in the industry. She believes it would be inevitable that women assume leadership and mentoring positions, nurturing not only the younger women but also men who decide to join the media profession.

The panellists shared their career journeys from inception, including their scholarships, employment opportunities and maternity leave phases, and how they are still championing the voices of women in media. The verdict was unanimous: it was and still is tough. Wendy Tuohy recalled how she received a condescending remark in her early days as a journalist by a judge who said “You’ll be a good girl, won’t you?” in her attempt to write an objectively balanced article. She still recalls how preferential treatment given to male photographers over senior female journalists. To this day, Wendy still mentors women and is happy to inject a dose of self-confidence to any woman. Laurel Irving mentioned how important it is to have women at board levels of management as they provide a fresh perspectives and different dimensions to the agenda of broadcast news. Laurel also invited the public, particularly those who are underprivileged or of a minority background to pitch stories to them, so they could raise their profile or amplify their message to the masses. Karen Percy remembered attending a program on domestic violence against women, which was organised by women for the men, only to witness the men take credit for how well it was organised! The challenge is out there for men to recognise women as equals and champion the change so women’s voices could be heard, respected and appreciated.

Esma Yucel from the AIS offered closing remarks, reminding the audience that while voices of change may often seem unheard, a single voice of difference can alter opinions of two more voices in a room of ten.

The AIS is pleased to have co-hosted this event as it works to provide a platform for equity and robust discussions that are vital in a progressive society. Laurel Irving is a professional journalist who is currently at the television station Seven Network.  She has been in the industry for 18 years and she is based out of Australia.

Laurel Irving began her career as a Journalist in January of 2002, when she began working for Network Ten in Adelaide, Australia as a political reporter.Network Ten is a public news company in Australia that utilizes television, radio, and digital platforms and caters to people ages 25 to 54. They hold four television channels in the five cities across Australia. Melbourne girl Wendy is a columnist and feature writer at Herald Sun and a former long-term feature writer and editor at The Age (where she started in journalism as a school-leaver cadet).

In two years out of newspapers after the birth of her daughter, Wendy popped in occasionally to 774 Melbourne to co-host on evenings with Derek Guille, and then filled in on Hilary Harper’s Saturday morning show for three months.

Wendy was attracted to a journalism career for the love of hearing and telling people’s stories and describes herself as “constantly curious” – and always in search of reasons to laugh.