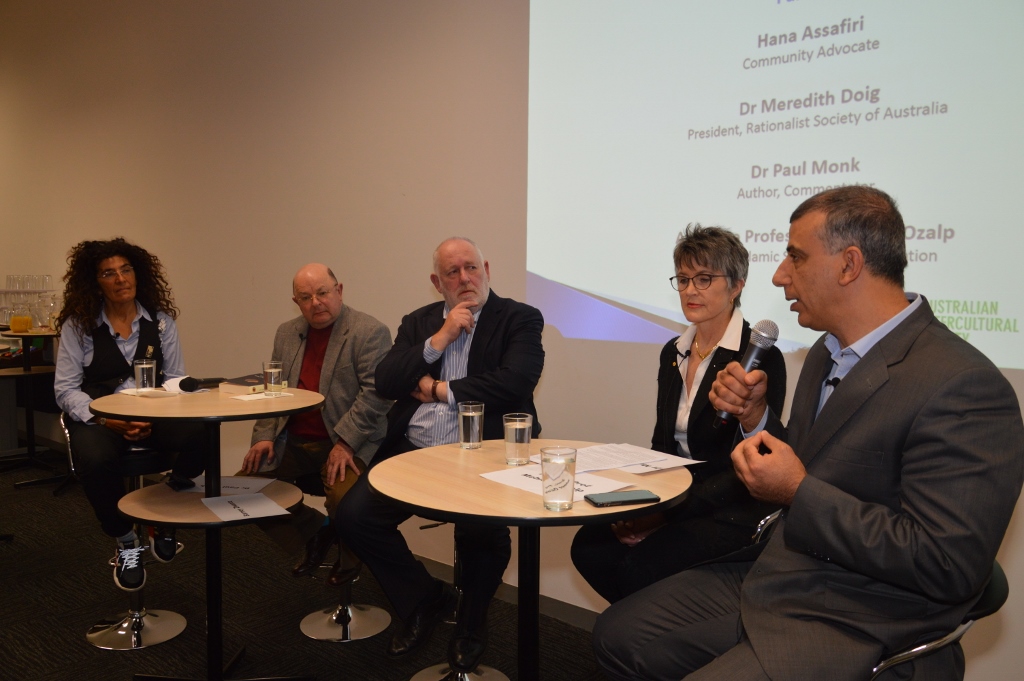 On the 31st of July 2018, the Australian Intercultural Society (AIS) hosted a panel conversation with Hana Assafiri, Dr Meredith Doig, Dr Paul Monk & Associate Professor Mehmet Ozalp moderated by Barney Zwartz on the topic of  ‘Islam in a Secular Society: Individualism vs Communitarianism’.

Hana has dedicated her professional and private life to removing barriers that prevent women from living prosperous lives. By opening her first restaurant in 1998, the popular Moroccan Soup Bar in North Fitzroy–now an institution for many Victorians, Hana has provided employment opportunities for marginalised members of the community.

Hana’s approach to business is both unconventional and effective, being passionately grounded in an understanding of community and generosity. Hana introduced the concept of a verbal menu and communal eating to dining in Melbourne, contributing to a unique culinary culture which has been embraced by Melburnians from all backgrounds, creating the sense of community Hana always strives to uphold.

In 2015, Hana was awarded TimeOut’s Legend Award for her flair for innovation and entrepreneurship. Her successful career was forged by her drive and passion to dispel misinformation and negative cultural stereotypes to create a supportive Victorian community. Hana is also known for her vibrant and outspoken style, she is celebrated for her ability to articulate social concerns confidently and compassionately, but without apology. Hana’s forthright approach is met in due measure with her kindness. It is within this compelling position of strength and compassion that internationally renowned artist Ai Weiwei, chose to include Hana in his famous collection of portraits of local social activists.

Hana continually stresses the need for greater intercultural understanding by creating opportunities via respectful cross-cultural relations. To foster such conversation and discussion, Hana holds monthly events coined ‘Speed Date a Muslim’ and ‘Conversation Salons’ to bring together academics, journalists and community organisations to debate and discuss contemporary issues, with a focus on women’s issues, racism and the need for plurality and a progressive vision. And with that vision she has been a mentor for many young women, particularly from marginalised backgrounds.

Hana has made long-term and notable contributions to greater intercultural understanding between diverse community groups. She has played an extraordinary role in promoting the rights of Muslim women, and indeed of all women. Her vision is advantageous to the Victorian community and has inspired many others to work with her to implement that vision.

Directorships have included the Port of Melbourne Corporation and its predecessor the Victorian Channels Authority, V/Line Passenger Pty Ltd, Bakers Delight Holdings, Federation University, Federation Training TAFE, Melbourne University, its subsidiary MUSUL and its affiliate the Graduate Union, Pathways for Diversity Education, Fintona Girls’ School and the Driver Education Centre of Australia.  She is President of the Rationalist Society of Australia, General Secretary of Reason Australia, Vice President of Taradale Music Inc, Secretary of Ardoch Owners Corporation and on the board of Dying with Dignity Victoria.

Her consulting work focused on governance and organisation effectiveness. For five years she was a facilitator of the Company Directors Course for the Australian Institute of Company Directors and for ten years, a moderator with the Cranlana Programme on Ethics and the Good Society.

Her education followed the classical liberal tradition, with studies in pure mathematics, linguistics and classical civilisation.  She served on the Federal Government’s Higher Education Council for four years, and has been a member of numerous university advisory committees.

Apart from her professional career, Meredith has been a long-time community activist, lobbying on topics ranging from tax and industry development to social equity and corporate governance. In 2016, she was a candidate for election to the Australian Senate and she is now General Secretary of Reason Australia, a new political movement for those whose inclinations are progressive but whose decisions are pragmatic.

In 2004, she completed a PhD on The Nature of Organisational Sustainability, focusing on corporate responsibility and ‘triple bottom line’ accountability.

For over 40 years she has been a passionate motorcyclist, advising the Federal Government on motorcycle safety and becoming the first Chief Motorcycle Instructor in Australia.  She still rides a BMW 650GS and has completed five overseas motorcycle trips.

Paul Monk has a BA in European History (Ist Class Honours) from the University of Melbourne and a PhD in International Relations (from ANU. He is a former senior intelligence analyst in the Defence Intelligence Organization, where he was successively Japan and Koreas Desk Officer and head of the China Desk. He is the author of eight books and is a regular contributor to the serious press with opinion pieces, reviews and feature essays. His most recent book is The Secret Gospel According to Mark: The Extraordinary Life of a Catholic Existentialist (Echo Books, 2017).

Dr Mehmet Ozalp is an Associate Professor of Islamic studies and the Director of the Centre for Islamic Studies and Civilisation which he founded at Charles Sturt University. He is also the Executive Director of ISRA (Islamic Sciences and Research Academy of Australia). Under his leadership ISRA pioneered teaching Islam as a faith tradition at the university level with Islamic studies courses at the undergraduate and postgraduate level.

Mehmet is an author, public intellectual and community leader, and has been involved in community service since 1992. He has been serving as the Muslim Chaplain at the University of Sydney and the Macquarie University since 2006. He was awarded Australian Muslim Role Model of the year in 2012.

He is the author of three books: 101 Questions You Asked About Islam, Islam in the Modern World and Islam between Tradition and Modernity: An Australian Perspective.